Peek Into Coco Austin’s Immense Shoe Collection and What Started It All.

I came accross this very interesting article on how Coco Austin developed her love for heels and also how she was able to build a closet full of shoes. I didn't edit nothing so you can enjoy the read as i did.

At 10 years old, most little girls dream about becoming a princess or movie star. But who could have guessed a beautiful, then dark-haired, brown-eyed tomboy would be fascinated with maintaining a shoe empire before she even knew what the word meant. In this case, it was a pre-teened Coco Austin that found her love for shoes before she even had a chance to finish her elementary school days filled with the typical art, math, and science classes plaguing most children her age. Most people reading this are probably wondering what type of shoe collection can spawn from a 10-year-old girl who likes to play in the dirt with the boys. But if you take a walk into Coco’s two-bedroom closet then the answer is simple. Just take a look at the four walls full of shoes—heels, wedges, platforms, and even tennis shoes—lined from floor to ceiling, literally.. 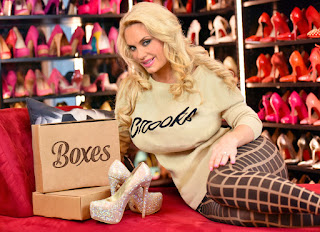 Before getting the chance to absorb the magnitude of what lived inside Coco’s massive walk-in closet, I was first greeted at her four-story New Jersey home by two English bulldogs: the famed Maximus and Spartacus. They met the video and make-up crew as we walked inside the house, passing the glass elevator to the stairs, and into the living room with a beautiful fish tank lining the divide between the living and dining areas only to be met by Coco’s rapper-turned-actor husband, Ice-T, playing X-Box. While the former Las Vegas headliner sat down for touch ups by the glam squad, I watched baby Chanel rocking back and forth as she slept in her baby rocker. As hair and make-up started to wrap up, the crew and I made our way up the stairs and into Coco’s closet. Here, we’re surrounded by fabulous dresses, gleaming shades, designer handbags, and of course, shoes! Louboutin; Gianmarco Lorenzi; Betty Paige—this closet is every girl’s dream! The first question that came to mind was, Why shoes? And when did they become Coco’s thing?

And here’s where the story begins. 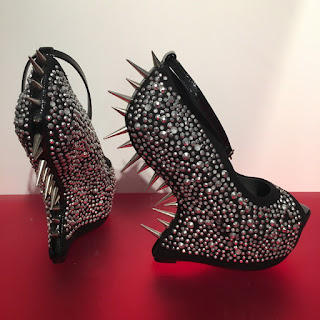 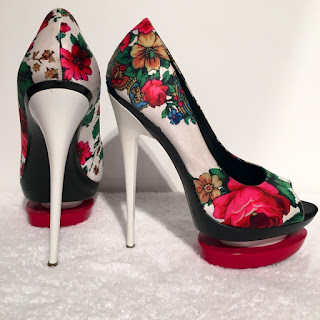 The California-born starlet was merely 10 years old when she indulged in what would become her life-long love affair with shoes at the foot of New Mexico’s Sandia Mountains. “Well, my shoe hoarding—I consider myself a shoe hoarder at this point—started when I was really, really young,” Coco tells Boxes. “I was at a friend’s house. She owned a pair of patent leather heels that were like two inches high and she was complaining how she hated them and she just wanted to get rid of them.” continued Coco. “I was like, ‘Wait, hold up! Let me see those.’ So I tried on this pair of heels and I just melted. I was like, ‘Oh my God, this is what I need to be in’—at 10 years old. I need these. I will take them off your hands.” Just like that, Coco had very own first pair of shoes. 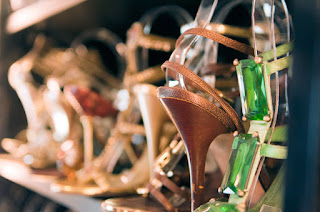 As Coco recounts her childhood heels, she notes that they were a pair of black, classically pointed pumps reminiscent of church shoes. Unfortunately, she didn’t hold onto them over the years but says the first gift she received from her hubby was a black pair of pointed Louboutin pumps—this time with a much higher heel, of course—that took to her childhood days. In fact, as her tastes in foot fashion progressed, Coco has always carried one motto: “When I look at a pair of shoes, the higher and skinnier the heel the better!”

But step away from the gifts that contribute to the curvaceous model’s present and walk a few years back into time—to age 15 for Coco to be exact: her tomboy years. Heels may have melted her heart but bringing them to school didn’t exactly work so Coco’s shoe collection actually started with an assortment of mainstream shoes including a certain oldie but goodie in nearly every color. 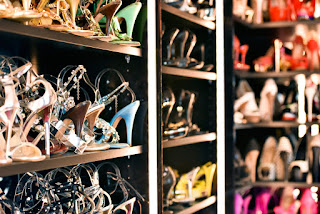 “I was too young to be wearing heels and you couldn’t wear them to school anyway so what do you do? You just go to the kicks and at the time Keds were the bomb! That was actually where my aggressive shoe collecting started,” Coco says with a smile across her face showing she remembers her early sneaker days quite well. “I had hot pink, purple, green; I had every color in Keds you could possibly think of.” It was a great way to start but slowly and surely her sneaker-only collection transformed into something bigger and a lot fancier. “I would say it just bloomed probably around 18 when I really started to know my style,” Coco notes. “I knew I liked sneakers but that kind of bloomed into a little bit of a higher heel and then even higher heels. I’ve always tried to get the highest heels I can find and even today when I wear a pair of heels it’s gotta be really small and skinny. That just oozes sexy.” 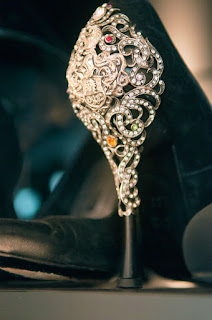 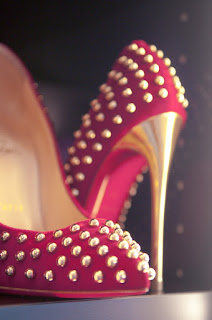 When people think of high, sultry, skinny heels these days their minds typically wander to Christian Louboutin, but Coco wants her fans to know that before Louboutin, there was only Gianmarco Lorenzi. “Pre-Louboutin, Lorenzi was the talk! And people don’t know about Lorenzi—well, people know—but it’s kind of like a hush, hush thing. It’s very hard to find Lorenzis in the States. Pre-Louboutin, this was the highest heel you could get. That’s why I have tons of old school Lorenzi shoes just scattered around.” 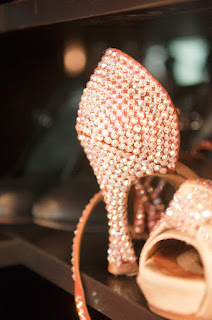 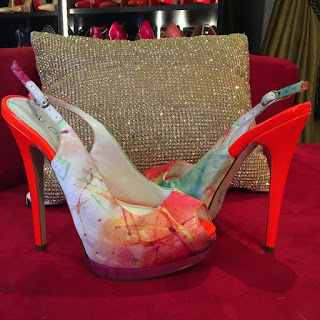 Admitting it’s virtually impossible to find the slim-heeled designer pumps in the States, Coco starts gleaming as she remembers when she joined Ice-T on tour. The two had a stop in Paris and that’s where Coco found the closest thing to heaven on Earth. “We went to the mall, The Galleria, and it was not like a normal mall. We went on the shoe level and it was miles and miles and miles of shoes,” said Coco. “I stopped on this level and I literally almost fainted. Ice looked at me and said, ‘You are crazy!’ But he can be a witness to this because when I saw all these shoes it just took my emotion away. Like how many shoes there are in this world were right there on this [mall] level. They had a whole Lorenzi section … and I tried every Lorenzi shoe on and had to bring them back. I loved them so much that I knew I had to wear a pair when we renewed our vows.”

As much as Coco will gush over a pair of limited edition Lorenzis or classic Louboutin pumps, she makes it clear that name brands aren’t everything when it comes to the garments that drape her feet. In her eyes, as long as the shoe looks good she’ll rock it. From bar scenes to the bedroom, Coco has it all, including Uggs, the shoes her husband jokingly believes has guys running the other way.” It’s no secret that most men aren’t gushing at the seams as women turn to the snow boots for warmth and comfort every winter, but sometimes style isn’t everything when it comes to walking through two feet of snow without catching frostbite. “Yes. They’re ugly and they’re not the most fashionable thing but they’re not supposed to be. I try to keep them cutesy but I don’t care. You have to have a pair of Uggs in the snow. It will save your feet and it will save you.” 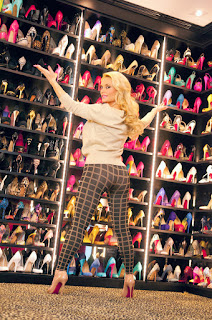 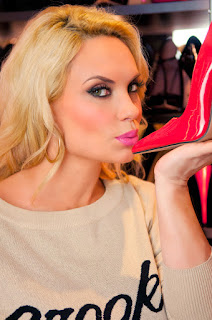 As a collector, Coco understands the importance of her fashion fixation. She has at least 750 pairs of shoes in her custom made closet, and that doesn’t include the additional 150 pair of shoes that no longer receive any heel-to-sole action. Instead of chucking her pumps or just giving them away without any sentimental intention, Coco shares her shoe wealth with friends, family, and fans. As family and friends, it’s easy to decide who gets what, but surprisingly, it’s just as easy for one of Hollywood’s newest moms to gift her fans.

“At this point in my life, I can keep the collection going, but I like other people to enjoy my happiness so I’ve been giving away my shoes to fans,” Coco tells Boxes. Every two weeks I do a shoe giveaway on my blog. Instead of just throwing my shoes away or giving them away to Goodwill, I collect all the shoes that I normally don’t wear anymore and I’ll just give them away to my fans, and there’s nothing attached to it. I want them to feel my happiness, and know that I loved them at one point and they’re not gonna go in the trash. The only thing is you gotta wear a size six! A lot of girls hate me for that! I get a kick out of giving my stuff away to people.” 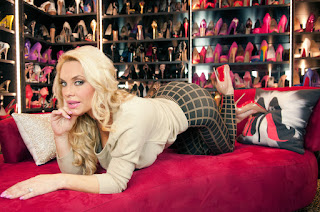 It’s clear Coco Austin isn’t going to ease up on her love affair anytime soon and her blog reinforces that notion every day but now that Boxes is here, she has a new and efficient way of sharing her collection with the world without feeling weird for being so obsessed with foot fashion. “Boxes is a great app. Every person is a collector at the end of the day. I wish it was available earlier in my life because it’s almost like you don’t feel strange. You don’t feel like the only one out there that is collecting so many items. For a while you feel like you’re the only one, and you’re like ‘I don’t really wanna show my collection off because I feel strange. I don’t know if anybody is out there like that doing the same thing.’” continued Coco. “With Boxes you don’t feel odd. You’ll see lots of other people who have the same type of views and behavior that you do, whether it be with shoes or comics or whatever.”

Comforting words from a shoe connoisseur whose love for footwear today is as strong as it’s ever been. Go ahead, take a look inside the starlet’s closet, and you’ll open your eyes to a new definition of foot fetish!

Culled from Boxes
Posted by www.glowyshoes.com at 02:01:00

omo! its a long read i couldnt finish reading.

she is truly a shoe whore and she knows her onions

She can open a shoe factory with these. Lovely shoes though except for some few btw her story is inspiring.