Okrika Shoes are not bad to wear....Lol. 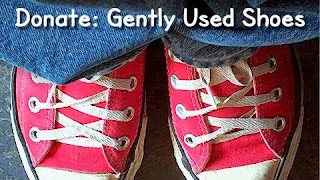 This is a repost of a post i've done before..so ya'll sending me mails on what i think of okrika shoes..this is for you to come and read.

Used shoes in a lame man's english simply means, shoes that have been worn, and then resold or given out to be worn by another person. Another term you could describe used shoes are"Second Hand Shoes" under which we have first grade and second grade shoes and the first grade is also known as second new shoes. But generally known as "OKRIKA shoes"

Whao! This article is so on point! You rock girl! Okirika shoe even lasts longer. lol.

Awww tnx doll...amd the funny thing is that some are quite expensive sef

Lol.. It depends on how you pick them.
naijaflo.com

Have never used fairly used shoes... I have not found any I like.
Pheezycorner.blogspot.com

great post :) Thanks for reshare it again, so that everyone sees it!

Oya lemme talk.
I have rocked okrika shoes wella, infact you get to see designers, correct one when you select well.
Till now if I see any nice okrika in the market I buy it.i remember going to Yaba 2 months ago to do my beddings, I saw one correct flat sandal not aba. Guess how much? 5k I had to withdraw to buy it.i fink I saw the sandal on Linda Ikeji.

I buy new shoes but what you can't catch me wearing is Aba made shoe, lailai .
Abegy no forming anything everyone has rocked it one way or the other.lolz

Lol..but criosly babes ..that yaba sha have correct shoes oo..the last time i rocked okrika was when i was in high school..but am looking for a friend that will up my morale then we can go and check..

I have rocked okrika shoes, they are good to go
www.alabekee.blogspot.com

i always look forward to buyong okrika shoes o bcos i prefer them to ibo made and hustle never reach to buy expensive designers and guess what, they are aleays durable.nice one dear
jibbyks.blogspot.com

Okirika shoes are not bad. They are even better than most China shoes that embarrass girls at weddings... lol. The good thing about okirika shoes is that they are may not be brand new but they are sometimes durable and last longer.

Also except you ve nt seen a good one, Aba shoes are not bad. My cousin hardly find her size in the make. So she usually order for them to make it for her in Aba.

See I rather buy Okrika shoes 2k or more than buy Aba for less. And I will keep on buying till my level reach to buy new designers.

Say what? Ok shoes are on point especially if u gat the eyes of them. A got a red flat ok shoes february 2010 and guess wat, I rocked it till last year, pple kept screaming at how nice it was. All I had to do was wash and sun it, den am good to go. A friend couldn't bear it anymore so she had to take it oo, so u see, its still being rocked till date. Ok shoes stand d test of time and they really last. I've had a lot I still rock and once that have been taken from me that pple still praise. They are cool joor.

Loool you have to be good at detecting the good ones tho. I've never been lucky in that regard

I have found your blog and I'm really impressed with your post. I hope you can post more information here so that I can share it to my friends. Keep on sharing!

Visit our site for you to see more second hand shoes : http://www.dailymotion.com/video/x27yqii_boex-germany-used-shoes-second-hand-clothing-collection-in-germany_lifestyle