10 INCREDIBLE HIGHEST HEELS WE CAN ONLY ADMIRE BUT CAN'T WEAR.


Whether you are a man or women, you know that there is a huge allure whenever it comes to sky high heels. For men, they look sexy on women and stimulate their senses in every way imaginable. For women, they make us taller, slimmer, and feel a mixture of confident and sexy that is simply powerful. High heels are simply intoxicating for anyone who looks upon a woman strutting her stuff while wearing them.

Although, is it possible that things have gotten out of control? Have the heels that we love so much gotten so high that it’s impossible for many of us to wear them? Living in a world that is very fashion conscious, and fashion forward, we find ourselves constantly trying to keep up with these trends that may or may not be too high for us to handle!

In the matter of high heels, the true distinction is a matter of personal opinion. Most people would argue that a high heel that is four inches and beyond is considered a “high heel,” while anything that is six inches and beyond (and most likely doesn’t give you the ability to be mobile in) are considered to be “sky high heels.” However, we suppose that the true answer is really; how high is too high? To that, most people in the fashion industry would simply answer, “nothing.” 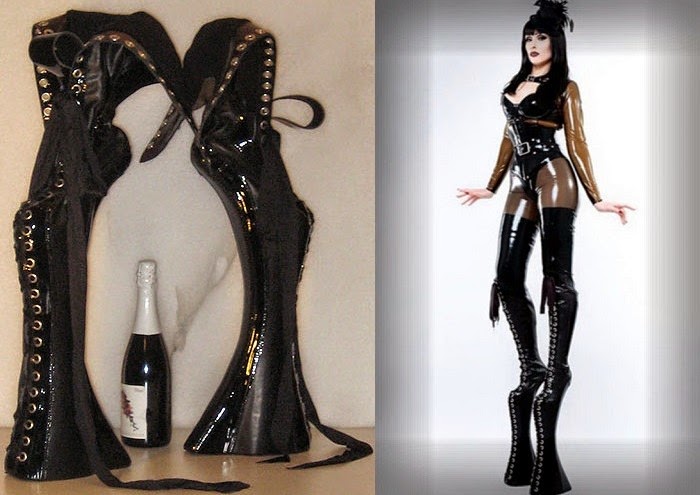 These sky high heels are designed by Berlin based boot connoisseur, Kronier Creations. This specific designer works their magic for each client individually, so no two designs are alike. The pair featured here were created for a well known German fetish model named Sinteque Berlin. Being that these heels are seriously high at twelve inches, we can’t imagine anyone actually walking around in them on a daily basis, but are mainly used for photographs. 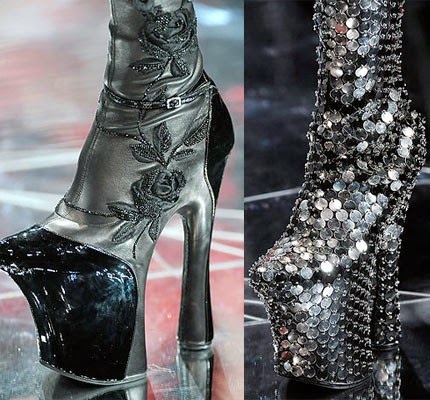 We love Alexander McQueen for their innovative thinking and always fashion forward designs, but do these take things a little over the top? Measuring twelve inches in height, they were spotted in his Fall 2009 Ready to Wear fashion show, waltzing down the runway. They were also featured in an editorial for German Vogue on model Heidi Klum. While these certainly fall into the “sky high” category, due to their size, they never went into production, and only a few lucky people got their hands on them! 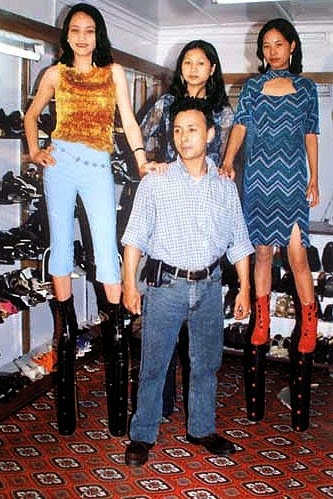 Designer James Syiemiong from India is the person who took the title of “highest heeled shoes commercially available” away from LadyBWear Limited back in 2004. These boots that he made became widely recognized for measuring twenty inches in height, and came in three colors: denim, black leather, and red leather. He often had everyday women seen modeling the shoes to simply make the point that the shoes could be worn and integrated into your wardrobe, though they did come with a warning label that read “the manufacturer of the shoe cannot be held responsible for any injury clients may sustain while wearing them.” 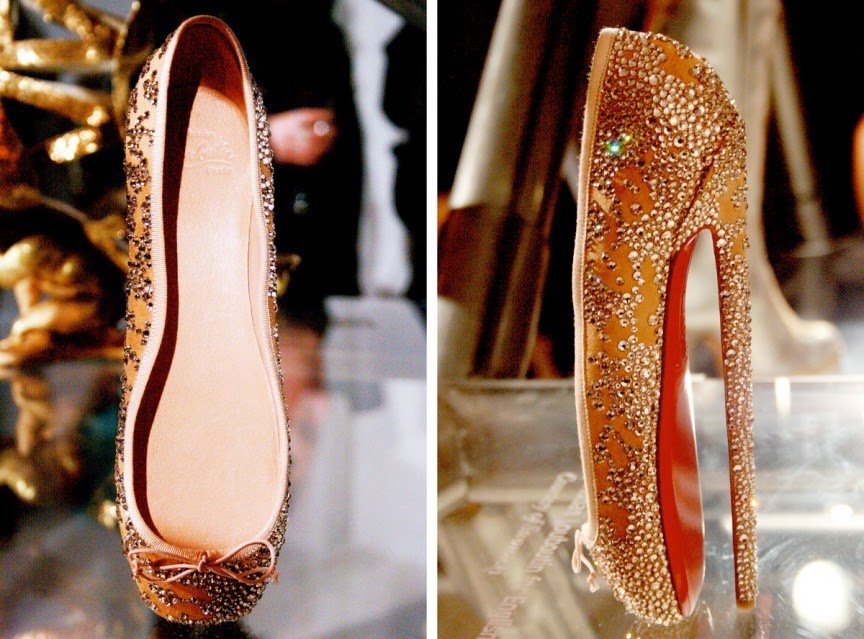 As we all well know, shoes aren’t always made for comfort…even those ballet flats that we love and carry around in our favorite handbag to slip on whenever our feet start hurting from our heels. These Christian Louboutins are ballet “flats” with a twist! Made solely for display in the “Shoes For Show” exhibition at Javari that featured a spotlight on high heels known for their beauty, rather than their function. The heels are covered in thousands of Swarovski crystals, and the shoes were actually donated to the exhibit by Swarovski. 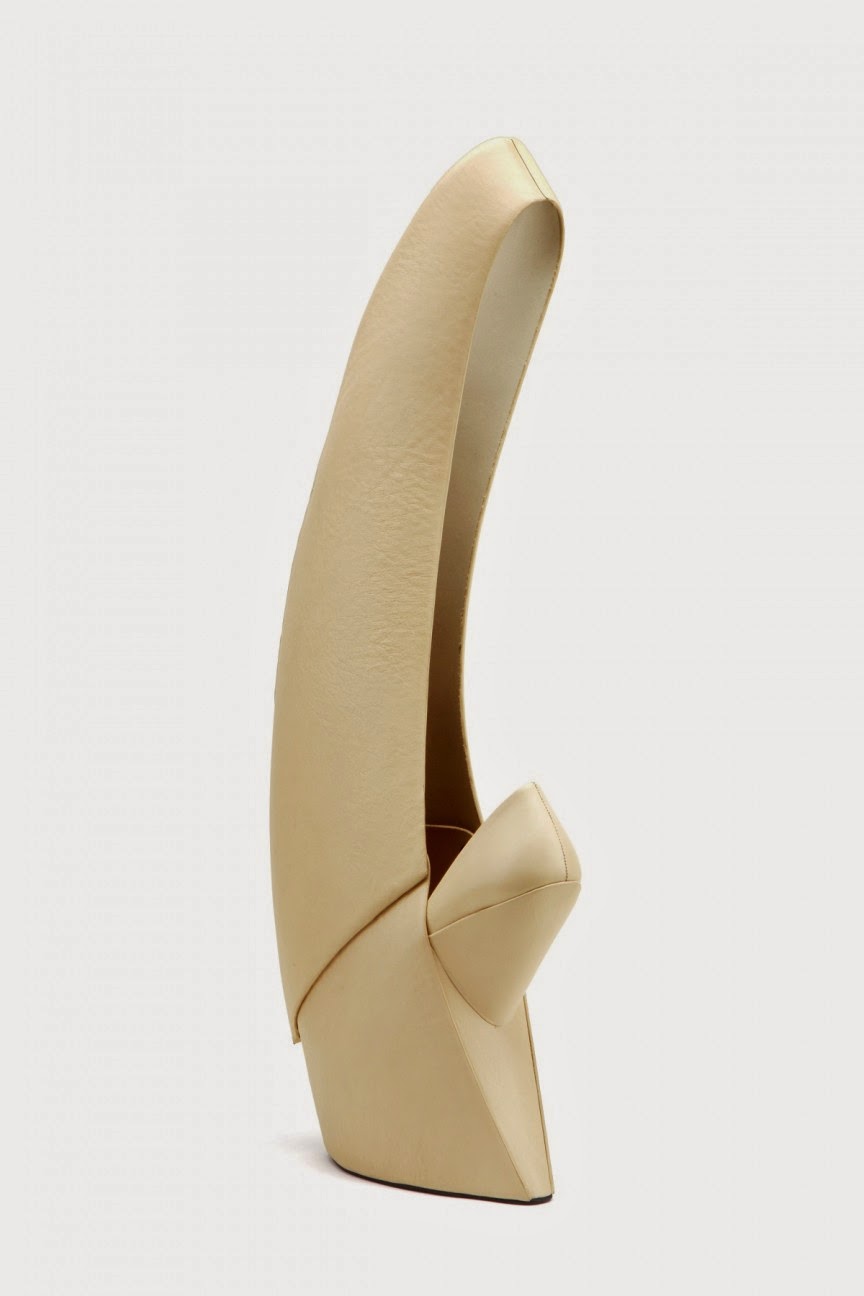 In this shoe collection, renowned design house United Nude came together with Iris Van Herpen to create the 9th collection collaboration in a row. Typically, they create one design that graces their runway shows, but for this collection they made two, a boot and a bootie option. This boot is a staggering seven inches in height and is an overall futuristic design, that takes over the natural shape of the foot and makes its mark on the body. 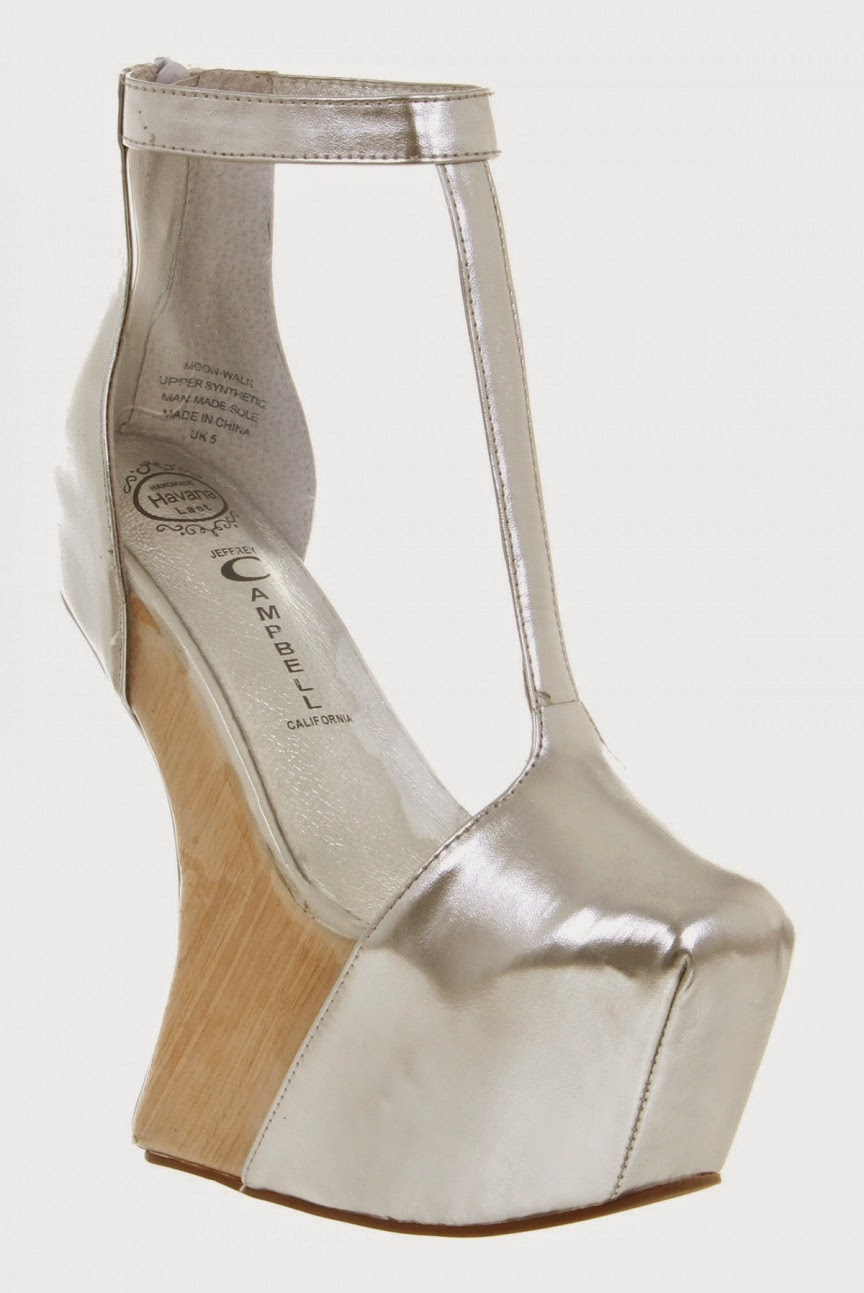 Jeffrey Campbell is highly known for his chunky platforms that come in a variety of designs, these being inspired by astronauts. They are futuristically fun and with their heel height well over six inches, they will almost make you feel like you could touch the moon. They are embellished with clear, metallic, and wooden pieces, all coming together to create a truly unforgettable heel to add to your collection. Be careful not to wear them too frequently though, because a heel assembled in this manner will make your calves double in size! 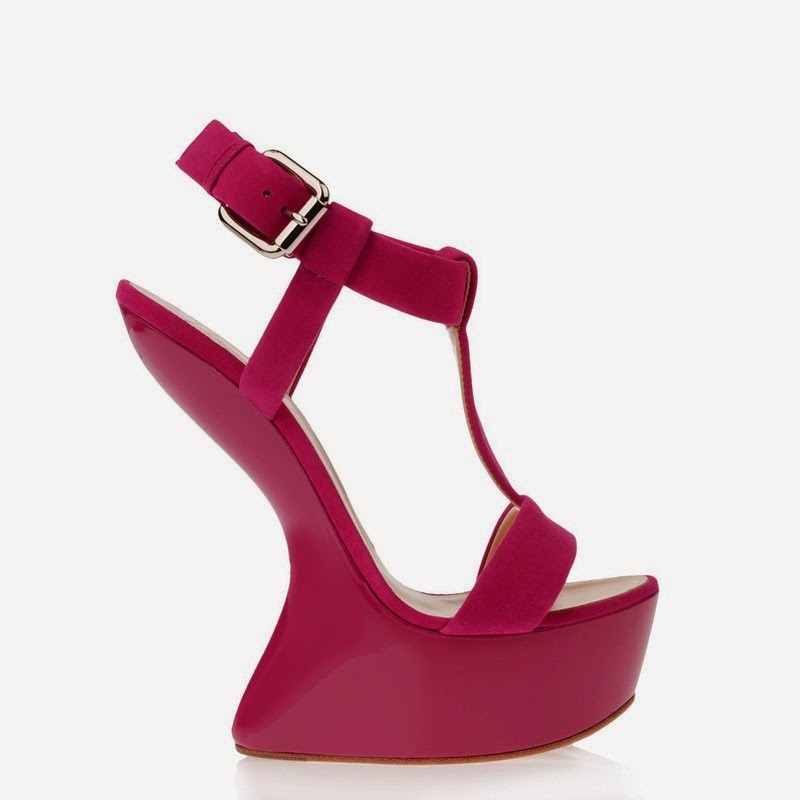 These hot pink suede Giuseppe Zanotti’s are truly a wardrobe gem and eclectic enough to be considered a sculpture in a museum! The shaft of the shoe is made of suede, while the heel is constructed of a contrasting patent material, made complete with a buckle that fastens at the ankle. The wedge heel is a sculpted design, but they are balanced out with the T-Bar along the front of the foot so that a person can actually wear them. This ever popular designer has created a truly fashion forward piece of art!

These were the winners of the Guinness Book of World Records for the highest heels known to man years ago. The designer was LadyBWear Limited which operated out of Cheadle, Cheshire England. When the brand was still in business, you could order a pair of these for a mere $1,167! The actual Guinness Book of World Records title for these shoes is: Highest Heeled Shoes Commercially Available, which is no longer accurate. If they were still in production, we could totally picture Lady Gaga rocking these like a pro! 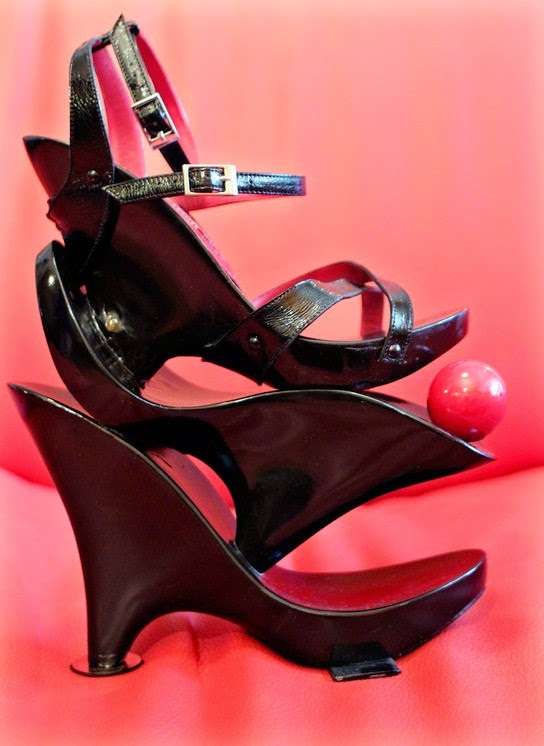 This creation was designed by Romanian designer Mihai Albu, being a super avant garde, wedge design. Looking as if their place is behind a glass case in a museum, these Triple Stacked Wedges measure 12.2 inches in height. The creator is known for his triple stacked design, creating various pieces of shoes and booties that are actually doubled (or tripled!) and stacked upon each other in a cascading effect. They certainly draw attention as there are none others like them in the world! 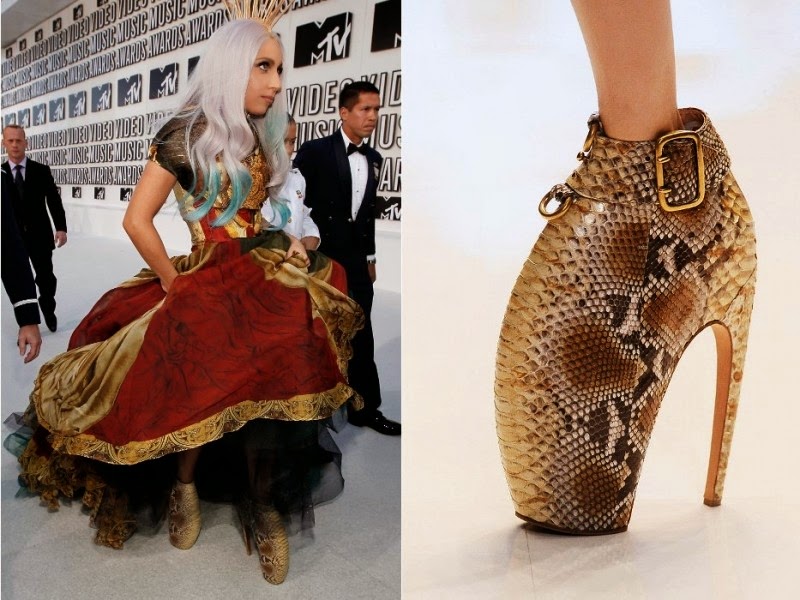 These shoes have become iconic for a few different reasons. First, because they were designed by Alexander McQueen. Second, because they rocked his Spring/Summer 2010 Collection as soon as they came down the runway. Third, they really do resemble Armadillos and lastly, because Lady Gaga wore a version of them in her Bad Romance music video. Either way you look at it; these shoes have made an impact for their peculiar shape and ten inch and beyond height. The heels are made from various materials and embellishments, which heavily impact their high price.

The shoes are hugleee!i can't even admire