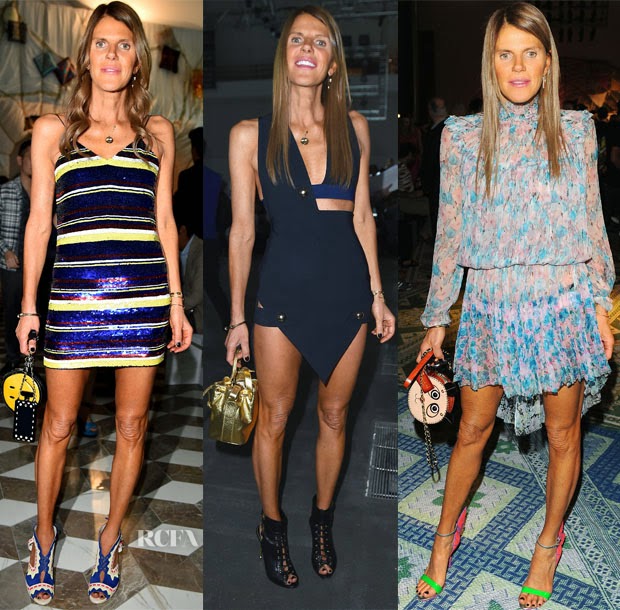 Anna Dello Russo was front and centre during Milan Menswear Fashion Week Spring 2015 this past week, where the ‘Vogue’ Japan editrix was on her standard stylista behaviour, which is to say that she grabbed stares in a few rounds of flashy and splashy statements, whilst marching to the beat of her own fashion drum. Just another day on the front row for Anna.

Versace Show: ADR jump-started the collections on a shiny note, wearing a sequinned Ashish Spring 2014 colourfully striped mini-dress with Sophia Webster’s strikingly graphic ‘Riko’ sandals and a happy-face clutch. Did one of her first looks of men’s fashion week have you smiling?
Continue...


Iceberg Show: Continuing the leggy theme, she sauntered out an Anthony Vaccarello Spring 2014 navy-blue, barely-there dress—a rather ironic choice for the Iceberg show. The frock featured the designer’s signature cutouts and sexy appeal, along with the spring collection’s triangular-shaped hem and cabochon buttons. Black booties and a gold Saint Laurent bag were mere afterthoughts to the pieced-together, skin-is-in dress.

Missoni Show: Switching from her Anthony Vaccarello edge to something a bit more sweet, she wore a Nina Ricci Spring 2014 flowery pastel dress, popped with a bolt of colour complements of Sophia Webster’s bold ‘Chiara’ butterfly sandals. A whimsical Yang Du clutch completed the look that actually wasn’t so innocent, given the see-through status of the dress that had her undies peeking through. 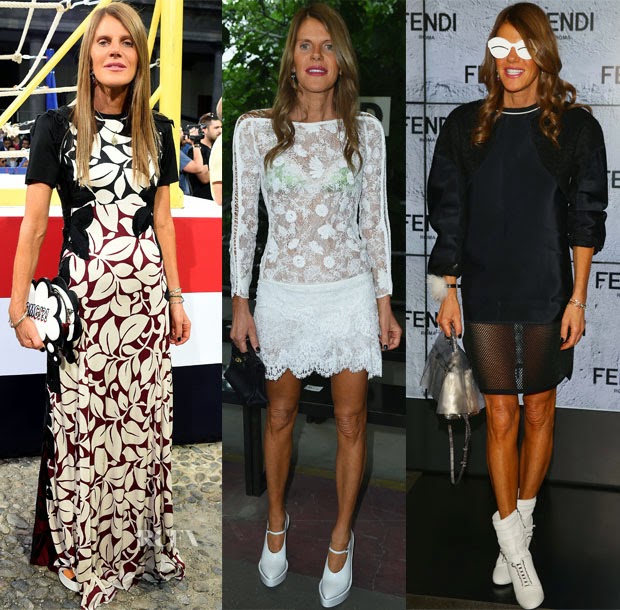 Moncler Gamme Bleu Show: This may be Anna’s most surprising fashion-week ensemble, but simply because it was her most tame and a rather out-of-character move for the boundaries-pushing editor. She covered up in a long Marc Jacobs Spring 2014 leaf-print dress that was previously worn by Sofia Coppola and Drew Barrymore, which also made the look less interesting simply for the fact that we’ve seen it before—twice. She did add her standard quirky spin via the Sophia Webster ‘OMG’ clutch.

Fendi: At the Fendi show, she showed her support for the brand by wearing a Fendi Fall 2014 black, bold-shoulder dress with a sheer hemline. The label love continued with her metallic Fendi bag, white Fendi high-top-inspired shoes and, for that touch of additional quirk, a pair of vintage Courrèges ‘Eskimo’ sunglasses. For its sporty yet still relatively sophisticated vibe, this may be my favourite look from ADR’s own fashion week—if for those sunnies alone.